“We felt safe enough to open up to each other” 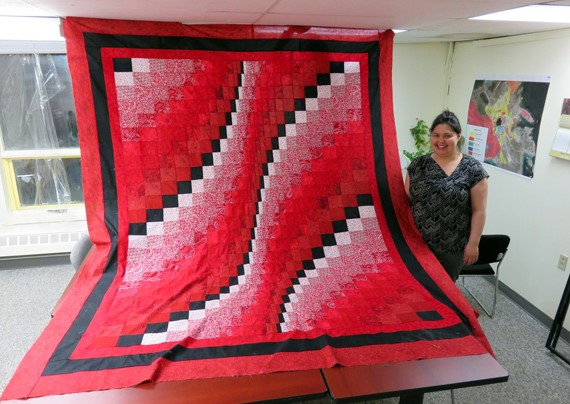 Kathryn Misheralak, a cultural support worker in Rankin Inlet, stands next to her almost-completed quilt. She said she’s recommend the new quilting workshop to anyone looking to challenge themselves and make new friends. (PHOTO BY SHERRY MOREY) 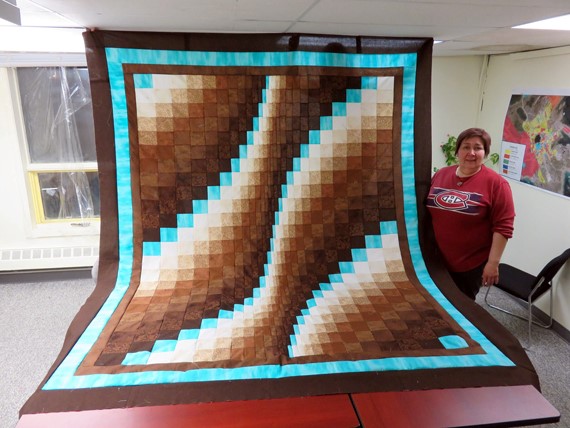 Mary Tatty shows off her new quilt, based on a beginner’s design called Easy Peasy Bargello. The course was taught by Dennis Saunders, a local quilter in Rankin Inlet. (PHOTO BY SHERRY MOREY)

A group of skilled seamstresses from Rankin Inlet recently had their work cut out for them — literally. The eight women have just completed their first quilts as part of a new workshop offered through the local Pulaarvik Kablu Friendship Centre. Participants recounted the “intensity” of preparing hundreds of strips of fabric with a rotary cutter, a much different method than making traditional parkas or kamiks. Local expert quilter and instructor Dennis Saunders chose a design called Easy Peasy Bargello, although it wasn’t quite as simple as its name suggests.

“I’m not used to having to iron every little piece of fabric,” said participant Kathryn Misheralak. “So you just have to have a little more patience.” Misheralak now says that her patience paid off; she created a strikingly beautiful red quilt, with lines of black and white that appear like waves through the design. Other quilts have bright ripples of green, yellow, purple and orange running through them. But Misheralak and the workshop’s other participants didn’t just leave with beautiful new bed covers. The workshop itself was designed to offer women in the Kivalliq community a space to talk about their relationships. Sherry Morey, assistant counsellor at Pulaarvik, has led the Rankin Inlet Spousal Abuse program for a few years now. The program hosts sessions on healthy relationship building and anger management in Rankin Inlet’s schools and its local healing facility.

Morey wanted to do more outreach with local adult women, so she considered one sure way to draw a group of women together — sewing. With a $12,000 grant from Nunavut’s Economic Development and Transportation, Morey was able to purchase new sewing machines, tables, fabrics and hire Saunders as an instructor. She named the new program Building Healthy Relationships by Connecting Threads.

“The interest in this was amazing.” Morey said. “We posted a notice and had 38 people sign up.” Only eight could take part in the first workshop and those women ranged in age from their early twenties to late fifties; some were single and others married for many years. “I’m single right now,” said Misheralak. “But I really enjoyed it because I got to talk to people [who are] in relationships. Some of them have their own trials [but] at the end of the day, they’re happy in the relationships they’re in. “And it made me feel excited to be in love.”

Quilters formed new friendships with each other as well, Misheralak said.

“We were a pretty good crew,” she said. “We felt safe enough to open up to each other.” As a cultural support worker at Kivalliq Counselling and Support Services, Misheralak said the workshop was also an opportunity for her to showcase the services offered there. The quilts have now been shipped to Newfoundland to be longarmed, a term that describes attaching the backing to a quilt. That should be completed by the end of May after which the quilts will return to Rankin Inlet. Misheralak plans to keep her quilt for herself but she’s already planning to others — one for a new baby on the way and another for her mom. “I’m going to stick with the technique I know for now but once I feel I have enough experience, I’d like to try other designs,” she said. “I’d totally recommended it to anyone who wants to challenge themselves and make new friends.” With the quilts valued at over $1,000 a piece, Morey said there’s also good potential for quilters to make some money with their new-found skills.

In the meantime, Morey is working with Pulaarvik to run a second and third quilting workshop in September 2016 and January 2017